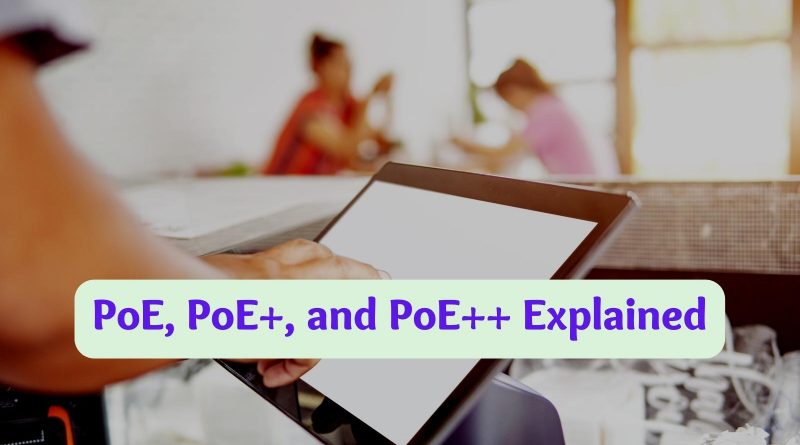 Power over Ethernet (PoE), PoE+, and PoE++ are three different types of Ethernet cabling technologies that are used to deliver both data and power to devices over a single cable. In this blog post, we will explain the difference between these three technologies and provide examples of when you would use each.

So, whether you’re looking to deploy IP cameras, Access Points, or VoIP phones, read on to learn which Power over Ethernet standard is right for your application.

PoE is short for Power over Ethernet, a system that can send electrical power through an Ethernet cable. This can be useful in several situations, such as when you need to power devices far away from a power outlet or to avoid running multiple power cables to the same device. PoE+ and PoE++ are simply higher-powered versions of PoE, designed for use with devices that require more power.

The Benefits of PoE

There are many benefits of Power over Ethernet (PoE), including the ability to provide power and data to devices over a single cable, reduced installation costs, and increased flexibility.

PoE can power various devices, including IP phones, wireless access points, and security cameras. Because PoE eliminates the need for AC power outlets and reduces the amount of cabling required, it can also reduce installation costs.

In addition, PoE offers increased flexibility because it can be used with various networking equipment. For example, suppose you need to add new devices to your network or move existing devices to a different location. In that case, you can do so without reconfiguring your network or installing new cabling.

PoE+ is an enhanced version of Power over Ethernet that supports higher power levels and can provide up to 25.5 watts of power to devices. It is also backward compatible with standard PoE equipment.

The Benefits of PoE+

The main benefit of using PoE+ or PoE++ is that it allows network devices to be powered without needing an external power source. This can be very helpful when there is no easy way to run a power cable to the device or AC power is unavailable.

Additionally, because the power is provided over the Ethernet cable, there is no need for a separate power cable, which can save on installation costs.

Another benefit of using PoE+ or PoE++ is that it provides a higher level of protection against voltage spikes and other electrical problems. When used with compatible equipment, these technologies can help to protect sensitive equipment from being damaged by electrical surges.

Finally, PoE++ provides a number of benefits over traditional methods of powering network devices. For example, because it uses lower voltages than traditional AC-powered networks, it poses less fire hazard. Additionally, it can lower energy costs because it delivers power more efficiently.

As Ethernet speeds continue to increase, the IEEE is working on a new standard – 802.3bt – that will enable up to 100W of power to be delivered over Ethernet cabling. This new PoE++ standard will enable high-power devices such as virtual reality headsets and 4K TVs to be powered directly from the network.

PoE++ (Power over Ethernet Plus Plus) is an upcoming standard allowing up to 100 watts of power to be delivered over Ethernet cabling. The IEEE is developing a new standard in response to the increasing data speeds in modern networks.

The original PoE (Power over Ethernet) standard, 802.3af, was released in 2003 and only allowed for 15.4 watts of power to be delivered over Ethernet cabling. This was sufficient for devices such as VoIP phones and Wireless Access Points (WAPs).

However, as data speeds increased and devices became more power-hungry, the need for a higher-power PoE standard became apparent.

In 2009, the IEEE released the 802.3at or “PoE+” standard, which increased the maximum power delivery to 30 watts. This was enough to power devices such as IP cameras and video phones.

The new PoE++ standard will increase the maximum power delivery to 100 watts, making it possible to power high-power devices such as virtual reality headsets and 4K TVs directly from the network. The increased power delivery will

The Benefits of PoE++

PoE++, also known as Power over Ethernet Plus Plus, is an improved version of the Power over Ethernet (PoE) standard. It was developed to address the limitations of the original PoE standard, which include its maximum power output of 15.4 watts and data transfer speeds of 100 Mbps.

PoE++ can provide up to 25 watts of power and data transfer speeds of up to 10 Gbps. This makes it ideal for use with devices that require more power than what the original PoE standard can provide, such as high-powered wireless access points and IP cameras.

In addition, PoE++ is compatible with existing Ethernet cabling, making it a convenient and cost-effective way to upgrade your network.

Power over Ethernet (PoE), PoE+, and PoE++ are all methods for delivering power to devices using Ethernet cabling. They are commonly used to power IP cameras, VoIP phones, and wireless access points. All three standards use different voltages and have different maximum power outputs.

PoE is the most common standard, while PoE+ is slowly becoming more popular. PoE++ is less widely adopted but offers the highest power output of the three standards.