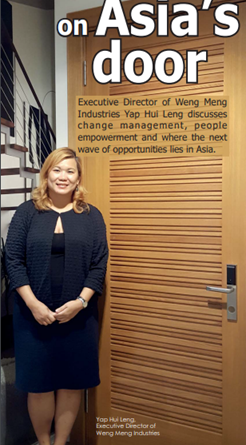 Weng Meng Industries is no stranger to change.

Beginning as a manufacturer of cable drums and office furniture in 1979, the company is now one of Malaysia’s largest suppliers of wooden and steel drums for the power and telecommunications sector. Knocking on Asia’ Door

In the early 1980s, Malaysia’s real estate boom prompted Weng Meng to venture into timber joinery products such as top boards, base boards, wooden pallets, and all kinds of flush and fire-rated doors. Spurred by the demand for timber and fire-retardant doors, a new door division was born in 1985; Sandor became the hallmark of high-quality doors in Malaysia. For many years, the factory only manufactured for the domestic market. Shortly after, in 1995, Ms Yap Hui Leng joined the company after graduating from Monash, Australia.

She got down to developing new products and markets as well as establishing proper quality assurance procedures—something the first generation did not implement. The first decade was a struggle since people often resists change. But once her best intentions reaped results, Weng Meng began to expand overseas. The first doors for the American market were exported at the end of 1999. As business grew, Weng Meng also expanded capacity. By 2003, it had three factories in Puchong; the newest two dedicated to engineered joinery door production. (The engineered door production line now makes up 70 percent of production.) Later on, operations moved to Olak Lempit. “In those days, emerging markets like China and Vietnam were also fighting for market share. It was tough trying to prove ourselves a reliable partner at a price point customers could
accept,” Ms Yap says.

Today, Weng Meng has an international reach spanning more than 30 countries. It buys American hardwoods and veneer, and makes flush, joinery, special function and engineered wooden doors for export to USA, UK and Belgium. Most products can be FSC- or PEFC-certified. The company also works closely with architects and builders to pitch for construction projects. As a partner, it drafts proposals for the entire building, from interior to entrance doors. It is able to call itself a one-stop solutions provider, offering a full range of certified fire doors & acoustic doors for markets that are specified with British, Knocking on Asia’ Door Malaysian, Singapore and American standards.

Ms Yap says, “Every project has different requirements and specifications. I am proud that we are versatile enough to meet standards, expectations, deadlines and budgets set by the project owners.” Apart from participating in trade shows, Weng Meng also hosts private events for interior designers, architects, developers and contractors to establish relationships.

In Malaysia, it has supplied properties such as the Grand Hyatt and MK20 in KL. Other ongoing hospitality projects are the W, Four Seasons and Equatorial Hotel etc. Overseas, Knocking on Asia’ Door it has delivered doors for Singapore’s Victoria Concert Hall, Changi Business Park and the new NCID hospital. Many hotels, offices and schools in Vietnam, Papua New Guinea, Sri Lanka, India and the Middle East are also fitted with Weng Meng’s doors.

As market activity slows down in Europe

Ms Yap believes that the future lies in the hospitality, healthcare, airport, residential and commercial sectors in Asia. “The market with the biggest potential is actually in our own backyard. The whole of ASEAN is bigger than Europe,” she remarks. “We will continue to spend time and effort nurturing relationships with existing partners. It is important to remain competitive so we can continue to serve them for the coming years.”

At Weng Meng’s 38th year anniversary in February, a new corporate identity was unveiled. The company’s and brand’s logo, website and catalogue underwent a makeover, alongside plans to renovate and relaunch its showroom to re-introduce the Sandor brand as a partner in total door solutions. Just like how it was 20 years ago, Ms Yap is driving this change. Of its necessity, she says that the world keeps changing and “if you don’t do it right, you cannot keep up. Up till today, we are still learning.” Furthermore, the management envisions a future built on a sustainable business model, one that empowers and creates a positive impact for its staff and neighbours.

“Investing in people will produce a multiplier effect. When people become more creative or innovative,

their ideas will take us to greater heights,” Ms Yap adds. In re-calibrating the company’s focus, a new Product and Process Engineering department was set up. Sales,

Product Management, PPE and Supply Chain will also collaborate closely to “trim down fat” when producing a consignment of doors.

shortage and mounting competition with smaller players that undercut the market’s price.

Ms Yap also emphasises selecting good partners and aligning the job’s specifications and expectations whenever the team works with a client.

“Now is the right time to anchor down what we want to do and how to improve ourselves as a market leader. Sometimes in order to move forward,

you need to look inward, understand yourself first before going out there.